Earlier this year, in February, Dell started selling new XPS laptop. We are fans of the original XPS 13"; however, the newer version seems so much better on paper. It's thinner and it's more versatile because it has that 360-degree hinge system and it's priced about the same.

It has all the same design factors with aluminum top and bottom panels with soft-touch carbon fiber on the deck. It's all very rigid and properly fitted, so it's true to its XPS name. This thing has great build quality. The hinges are solid and they allow you to rotate the screen all the way around. 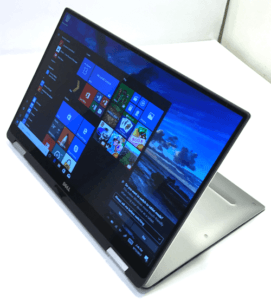 For ports, there is a microSD, audio jack, and a pair of USB-C ports (only one supports Thunderbolt 3), there are no USB-A ports and that's how it is able to remain so thin. Dell did, however, include an adapter.. so, good on them for that! 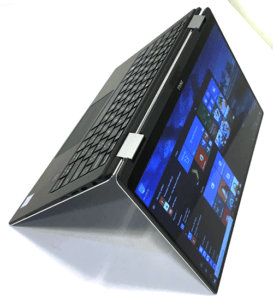 The screen is a is a 1080p with a great color gamut of RGB at 96% and Adobe RGB at 74%, the accuracy needs to be calibrated from the box, but that's ok. It's reasonably bright with 320 nits. The super thin bezel makes the screen look much bigger than it actually is. There is also a QHD version available if you want.

The keyboard is a little disappointing. The keys themselves are a little bigger than normal, they are a couple millimeters wider. They don't feel too different than the regular Dell XPS 13 keyboard, it still has a short travel stroke. The biggest problem is the location of the up and down arrows. They are way too easy to hit while going for the left or right keys. If you are a spreadsheet user this could be a real issue for you. 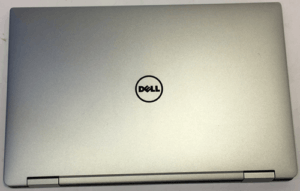 The trackpad is good. It's the same shape and size as the regular XPS 13". It supports Windows Precision drivers that is very accurate and the click mechanism is really solid in this unit. There is also now a fingerprint sensor that's located on the right of the trackpad in a good place. It works with Windows Hello and it's tactile so you can find it in the dark. We find the trackpad a little better on the new Dell XPS 15 laptop.

The webcam is once again located on the bottom of the screen so it has that strange upward angle to it. It also features an infrared sensor to work with Windows Hello. 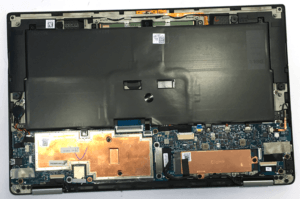 Getting to the internals is fairly easy by removing a few screws. The RAM is soldered on but the NVME drive is user replaceable. it's the same 256GB Toshiba as the original XPS and its speeds are still pretty good with read speeds of 1200MB/s and write 650MB/s.

The 45 watt-hour battery takes up a huge footprint and it kicks out some really good battery like in the ballpark of 8 hours and charges with a 50-watt USBC. 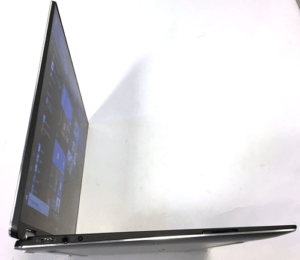 It runs Intel 4.5-watt TDP processors but if the thermal management is working well they can up to 7-watts. That's what Dell did. The performance is surprisingly good for such a low wattage chip. it feels very snappy a single core stuff like work and web browsing. Anything heavy that uses both cores for an extended time will bog it down considerably. The regular XPS 13 with the i5 or i7 CPUs will handle heavier tasks better. 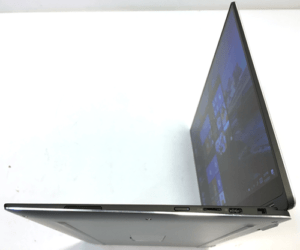 Gaming on the 2-in-1 XPS isn't great even compared to the previous XPS 13; you can only play light games like CS: Go. It does, however, have a Thunderbolt 3 port that uses a four-lane PCIe. It doesn't officially support external GPUs, but with a couple drivers it can connect up. Now, keep in mind it is a fanless dual-core CPU, so CPU dependent games are still not amazing, but some games do pretty well. 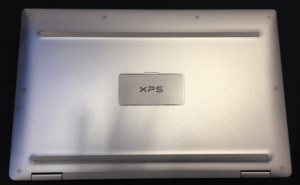 No fan- No noise

Since there is no fan, there is no fan noise. Go figure, right? However, the thermals are not bad. There is an obvious warmer cluster up top where all the good stuff is, but it's a very comfortable device to use. 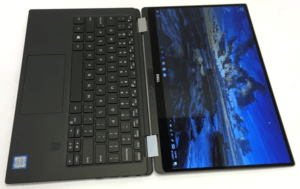 The speakers when in laptop mode sound very similar to the XPS 13 speakers, but because of their location when you have it in tent-mode you lose a ton of audio clarity. The sounds rattle around behind the screen and thus you lose the stereo effect. In presentation mode, it's actually worse. The crazy thing is in the non-laptop modes is most commonly when people consume the most amount of media and it would make better sense to engineer these positions to have better sound dispersal. While in tablet-mode it's fine as long as you don't cover the speakers with your hand. 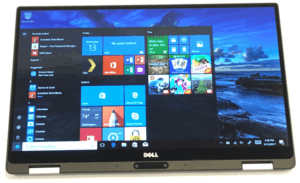 Speaking of tablet-mode, this is the feature that really separates the 2-in-1 XPS 13 from the original XPS 13 laptop. Early I mentioned the super thin bezel, it is awesome when it's a normal laptop but when using it as a tablet, it leaves hardly any room to put your hands to hold it without covering the screen. In my opinion, this tablet-mode has the exact same issue that other ones have: it's not comfortable to hold. 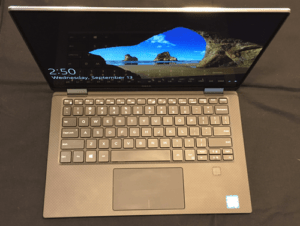 The soft-touch wrist pad makes it super grippy in your hand but it still weighs 2.7-pounds, and that's just not comfortable to hold. Not to mention that there are no hardware audio controls, you must download software and use it through the touchscreen. It's clear that it was designed to be a "laptop first and tablet second" kind of option. Since this thing prices at $1,000 USD, it's really close to the original's pricing and unless you are dying for a 2-in-1, then there's really no reason to opt for this version as opposed to the original XPS 13. 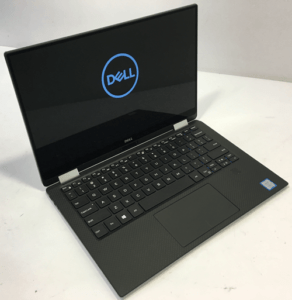 The Core i7-7Y75 is a dual-core SoC from the Kaby Lake-Y family manufactured on the 14nm node. It’s designed for ultra-thin convertibles, notebooks. The chip is a direct successor to the Core m7-6Y75 from the Skylake generation and Intel claims the improved so-called 14nm+ architecture brings the Core i7-7Y75 closer to the mainstream Core i7 lineup so that’s why the company renamed it.

However, most of the specs remain the same with a slight boost in clock speeds and now sports the newer Intel HD Graphics 615 iGPU. The dual-core CPU is clocked at 1.3 – 3.6 GHz and thanks to the Hyper-Threading technology, the chip works with four instead of two threads, which significantly increases the multi-core performance. The SoC also has a DDR3L/LPDDR3 dual-channel memory controller.

As far as the iGPU is concerned, it consists of 24 EU (Execution Units) and runs on clocks between 300 and 1050 MHz utilizing the available memory. It also supports native hardware decoding like H.265/HEVC with 10-bit color depth and Google’s VP9 codec used for YouTube. The whole SoC is rated at 4.5W including the GPU and the memory controller but can be adjusted by the OEM. Due to the extremely low TDP, the chip is usually implemented with a passive cooling solution.

intel_hd_graphicsIntel’s HD Graphics 615 is a low-end integrated graphics unit found in Y-series Kaby Lake processors. It incorporates 24 EUs (Execution Units) like all GT2 units and can be clocked at up to 1050 MHz while the base frequency is 300 MHz. With these specs, the chip is integrated into KBL-Y processors rated at 4.5W TDP, including the memory controller.

Since the iGPU is using the same architecture as before, the most noticeable feature would be the full hardware acceleration of the H.265/HEVC Main10 and Google’s VP9 codecs. With this, Intel aims to improve the overall energy efficiency and performance of the iGPU.